For current prices of all cameras and options, please see the NeutronOptics price list. Cameras are delivered with everything necessary for use with any TV monitor or PC. 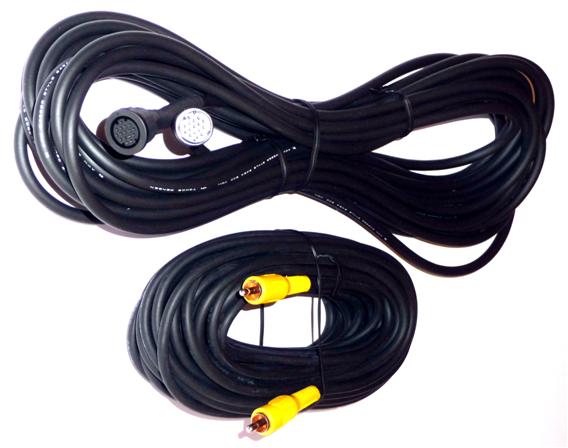 The standard video camera is delivered with a 10m video cable and a 3m exposure controller cable.

We can offer 10m video cable extensions, and these extensions can be chained to produce 20m or more lengths.

Even longer distances can be obtained with the wired or wireless remote control and wireless video transmitters, which also allow programming of exposures. (click photos to enlarge).

Standard video cameras are delivered with a USB-2 computer interface and software to view the image on any Windows PC, where it can be treated and recorded using the AMCap video capture software. Additional interfaces can be provided to route camera images to several computers. (click photos to enlarge). RoboRealm & VLC software also makes the image available via a web browser. We can also supply multi-channel computer interfaces. 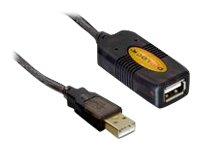 High resolution cameras are supplied with an amplified 10m USB-2 extension control cable. An additional 10m USB-2 extension can be used to extend the length of the control cable to more than 20m. This extension should be connected first without any camera to allow Windows to recognise it as a USB-2 hub and install the necessary driver.
For the standard video camera, it is best to use instead a simple video cable extension. 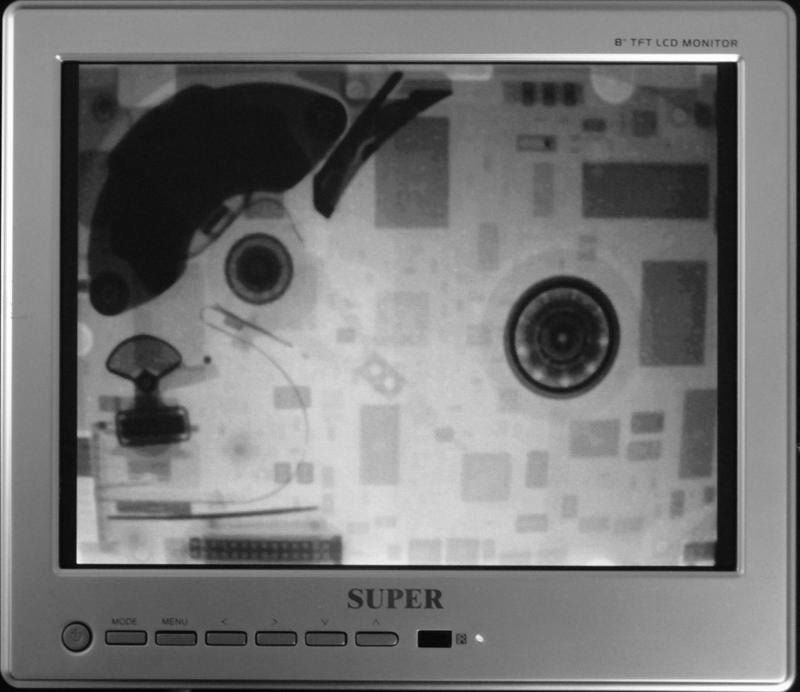 We have introduced a new Super 8" TFT video monitor, that will display 800x600 pixels, matching the resolution of the standard video camera. As well as video input, it has a VGA computer connecter, a desktop stand and a standard 100V-240V/12V transformer.

A video splitter is supplied to take the same image to your computer with a separate video cable (not included). (US and EU compatible, click photos to enlarge. The supplied monitor may look slightly different depending on stock). 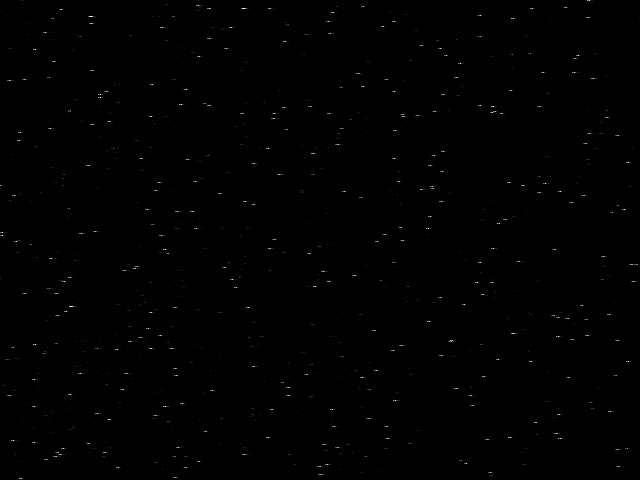 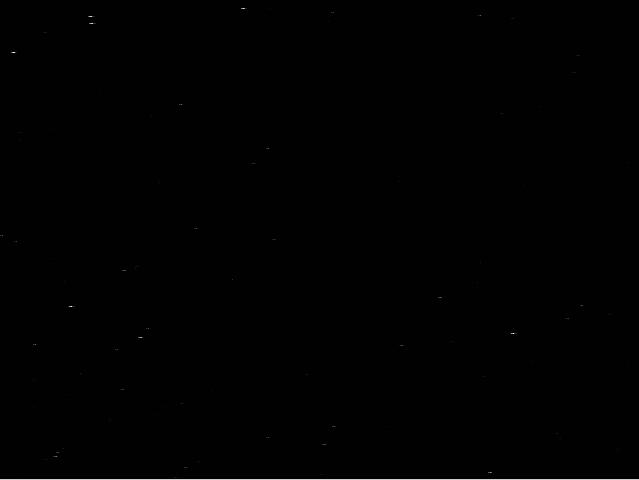 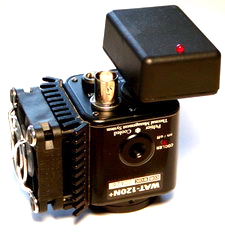 CCDs when warm generate electronic noise (dark current) that shows up with long exposures as bright pixels. The left image above shows such "hot pixels" with a long high-gain dark-field exposure from an unmodified camera; the right image, from a camera cooled by -25C using a Peltier cooler, heat-sink and fan, shows few hot pixels.

The photo on the left shows our optional Peltier Cooling option on a Wat-120N+ together with an optional wireless exposure controller on top.
Please read the Peltier User Guide before use. 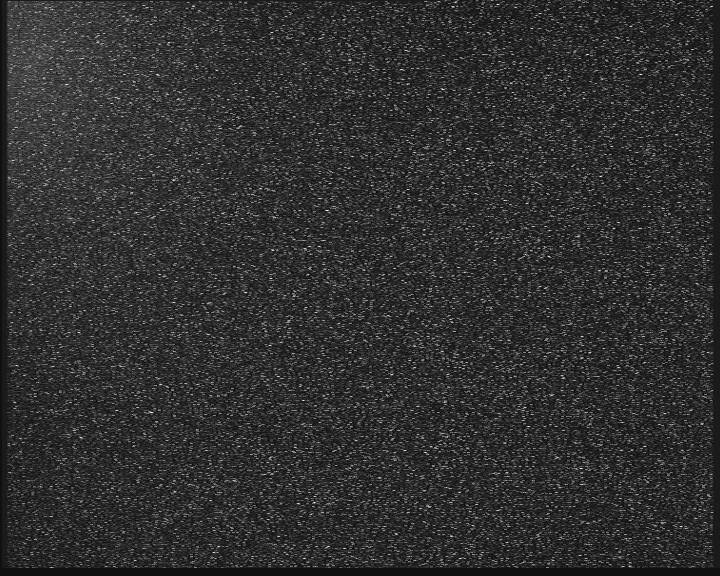 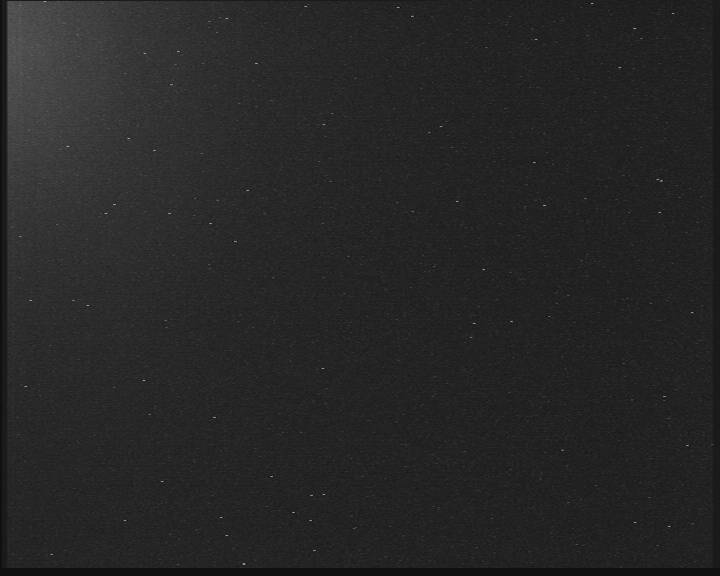 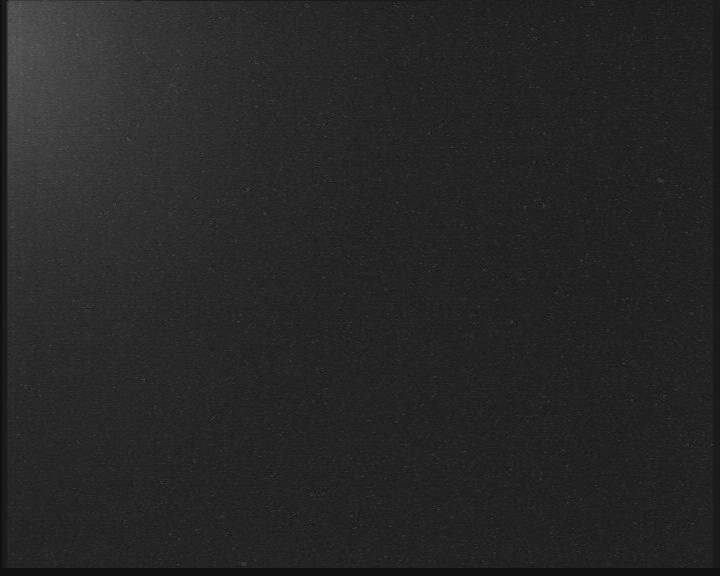 Note the faint glow in the upper left corner due to infrared radiation from the CCD amplifiers; this can be eliminated by the Process/Subtract Background... filter.

The standard video camera comes with its own 16-pin wired controller on a 3m cable.

Much longer distances (40m or more) can be obtained with the optional "wired" controller, which uses ordinary 2-wire RJ11 telephone cable. This is also an advantage if the controller cable must exit an instrument tank, or if the similar wireless remote control (below) cannot be used.

This optional "wired" controller, as well as the similar "wireless" controller (below), include an RS232 port and cable to allow them to be controlled by a computer using simple batch files or the MS-Windows hyper-terminal software. This is described in the wired/wireless controller manual. 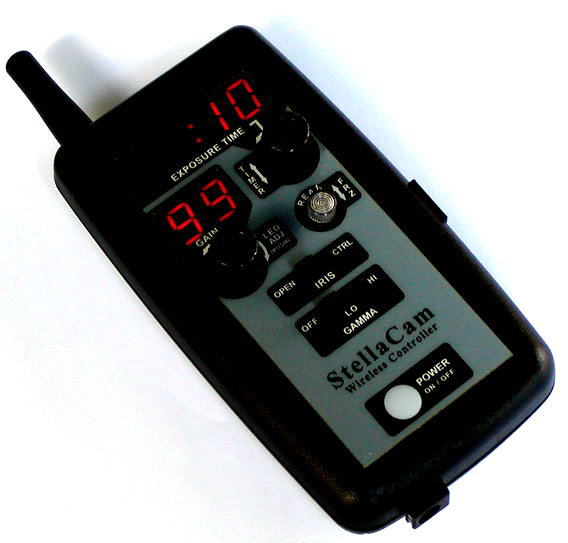 This is a modification of the optional wired controller, to provide completely wireless operation. A 30g 1mW receiver is plugged into the camera in place of the existing controller, which is replaced by a hand-held remote transmitter (left). Exposures of 0.0005 secs to 90 mins can be set, and once set the remote transmitter, which runs on batteries, can be switched off; the previous settings will then be used whenever the camera is powered on (US & EU compatible).
For details, see the wired/wireless controller manual. (click photos to enlarge). 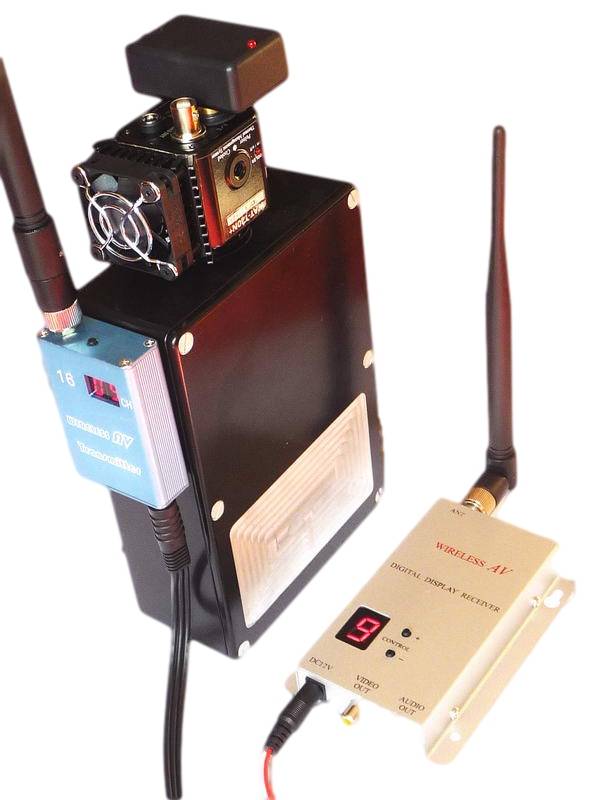 This transmitter operates on 16-channels near 1.2 GHz or 12-channels near 2.4GHz at 700 mW. Lower power transmitters are also available if required to satisfy local regulations. The wireless channel can be changed at the press of a button, and additional transmitters or receivers can be purchased separately. Before ordering, please check the radio frequencies and power permitted in your environment. 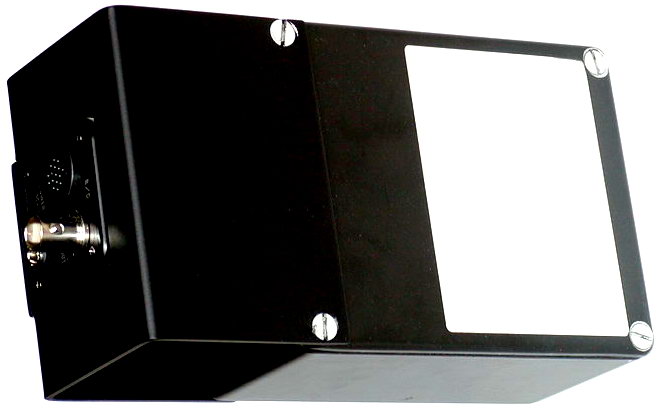 The exposed CCD unit of version-2 can be broken from the camera body if it is subjected to a shock. The 80mm and 100mm standard cameras now have a simple aluminium hood to cover the CCD unit; it is bolted onto the existing 4mm screws in the front and back of the body, and is available as an optional extra for version-2 of the camera (click photos to enlarge).

Translator to move the camera into the beam 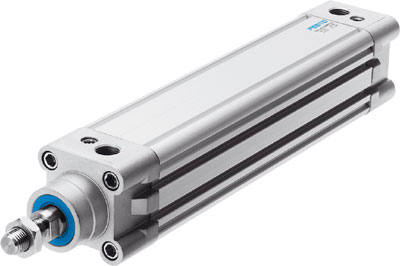 The scintillator will eventually be destroyed if left permanently in the neutron beam, so the idea is to use a simple remotely controlled compressed air translator to move the camera into the beam only when required. This would be similar to translators used for beam shutters, but less powerful since the cameras weigh <1 Kg and need be translated by only ~125mm. FESTO AG anti-rotation translators eg DNC-32-125-PPV-A-Q-V3 are recommended. 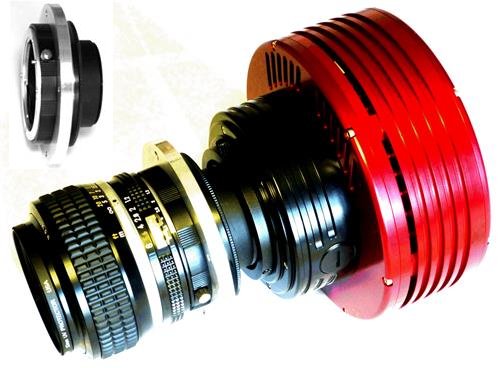 The photo shows a very bright f/1.2 Nikkor 50mm lens on our LF40+ 2048x2048 pixel camera. The T2-mount (42x0.75mm) to Nikkon F-mount NeutronOptics adaptor (insert) can be adjusted in fine increments to obtain a camera flange-lens mount distance of 15mm to 100mm. (The usual distance is 30mm). A similar adaptor is available for Canon lenses. Click to enlarge.

Even though the CCD unit is isolated from the beam by a mirror, like all electronic equipment, it will eventually be degraded by neutron and especially gamma background, and should be shielded if possible. Radiation damage will show up as white noise pixels. If necessary, the standard video CCD unit can be replaced without opening the camera simply by loosening the 3 small screws holding it at its base.

The light output of the neutron scintillator will fall by 30% after an integrated flux of 1014.n.cm-2 (i.e. after more than 100 days in a constant 107.n.cm-2.s-1 neutron beam). The scintillator should therefore last several years of normal operation, but if necessary the scintillator can be replaced by opening the camera.